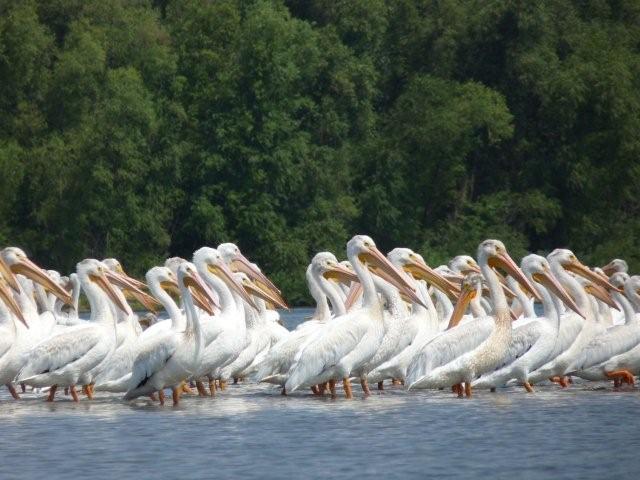 All bird watchers and nature lovers should heed the call. Spring is on its way and with it migrating birds worth noting. The American White Pelican, once in danger of extinction, will make its way to Starved Rock Country and the Illinois River. Visitors to Heritage Harbor and the Ottawa area can catch them en route to Starved Rock Country. Find out more about this long-awaited bird and how to find the best locations to await a glimpse of the American White Pelican.

What You Need to Know

These long-billed, majestic fliers can easily adjust to changing wind patterns. Peter Chaswell, of The Verb ‘To Bird’, said,

“Nothing else flies like that [White Pelicans], serene, untroubled, almost daring the air to throw them an updraft so that they can make a subtle, nearly invisible adjustment to their flight feathers and continue unperturbed…”

These birds were once close to extinction but are now rebounding with the ban of DDT and other harmful pesticides. Visitors should know:

Starved Rock State Park has been welcoming flocks of the American White Pelican for the past decade with a few bachelor pelicans making the park their home most of the year. This area and Heritage Harbor, with its location along the Illinois River, makes for prime locations to feast your eyes on the magnificent American White Pelican. Contact a friendly associate for more information on the best viewing sites at (815) 433-5000.

This site uses Akismet to reduce spam. Learn how your comment data is processed.