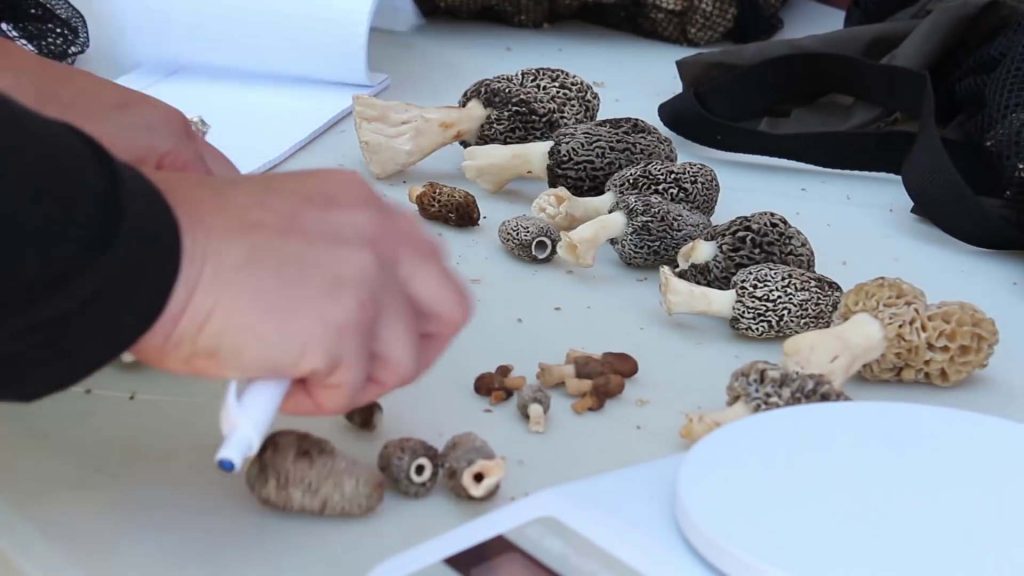 The Morel of the Story

The Morel of the Story

Get your hunt on at the Midwest Morel Fest 2018

Just one Morchella, give it to me

As any morel enthusiast knows – ‘tis the season to be jolly, not for sleigh bells and singing in the snow, but for morel hunting in the sweet spring air of the Midwest. The melting away of the snow and the return of spring creates the perfect conditions for recently activated Mycelium spores to grow and bear fruit – otherwise known as the morel. Morel is the word used to refer to any mushroom species within the Morchella genus, which, owing to its rarity and popularity amongst chefs and foodies, is regarded as the fantastic, smoky, earthy, indescribable…even mystical mushroom.

A taste that’s earthy, but out of this world

Tom Nauman, self-confessed Morel maniac of Morel Mania, says that “the flavor of the morel mushroom is an ongoing debate amongst mushroom hunters”.  The flavor of morels is somewhere between nutty, meaty and earthy, but, as Nauman says “Whatever it is, it keeps people coming back [to the Fest] every year.”

And anyone who’s had the privilege of tasting one of these fungi delicacies will agree – the trance-like glaze that comes over the eyes is not for any mind-altering substance (no, they are not magic mushrooms), but is attributable only to the blissful, some would say orchestral, culinary celebration that takes place in your mouth when they are prepared correctly.

Morels hidden in Ottawa Illinois (the hidden gem of the Midwest)

Join us on the Jordan Block of Ottawa IL, May 5th. Ottawa is in the heart of breathtaking Starved Rock Country, the hidden vacation jewel of the Midwest. And we have to make the point here, that there is a certain poetic subtlety in the fact that the hunt for these hidden and most prized Morchella are found in the hidden, beautiful and charming small town of Ottawa IL.

Thanks to the  Ottawa Visitors Center (OVC), the Morel Fest has, well, you could say…mushroomed since it was revived in the area in 2007 (previously held in Magnolia). The Executive Director of the OVC, Curt Bedei, celebrates the 2018 Morel Fest by pointing to the ideal suitability of Ottawa and the Morel Fest. “The botanical, outdoor brand of the city suits the Fest…and, being a family affair with intergenerational appeal, we get many return participants coming to the city year after year.”

Grow in the secret art of Morel Foraging

Nauman, ever passionate about his craft (being a descendant of a lineage of morel hunters), has begun the Morel University, which focuses on teaching people about morels and passing on the ancient art of finding them. The spring season in the Midwest provides the window for morel hunting, and many avid hobbyists have converted their passion into a revenue generator.

Mix in Some of the Harbor Life

Speaking of secrets, Ottawa IL is the home of Heritage Harbor, the Midwest’s increasingly favorite marina resort and development that has been attracting the attention of many who are seeking a retreat from the bustle, but in a way that enables them to spend quality time with loved ones, soak in the scenic views of Starved Rock Country, and to do it on or near the beautiful Illinois Waterway.

Heritage Harbors – Harbor Inn offers Morel Festers the opportunity to explore Ottawa through its Cottage Rentals offering, which is sure to give you an honest-to-goodness experience of the charming small town – just like a local. You will meet people who know how to give you a truly energizing, authentic and rewarding stay.

Jump on over to Midwest Living to find some of the most celebrated morel recipes (like the Spring Pasta Morels, Ramps and Peas) that have become part and parcel of the life of Midwesterners since morel mushrooms were first discovered in the area.