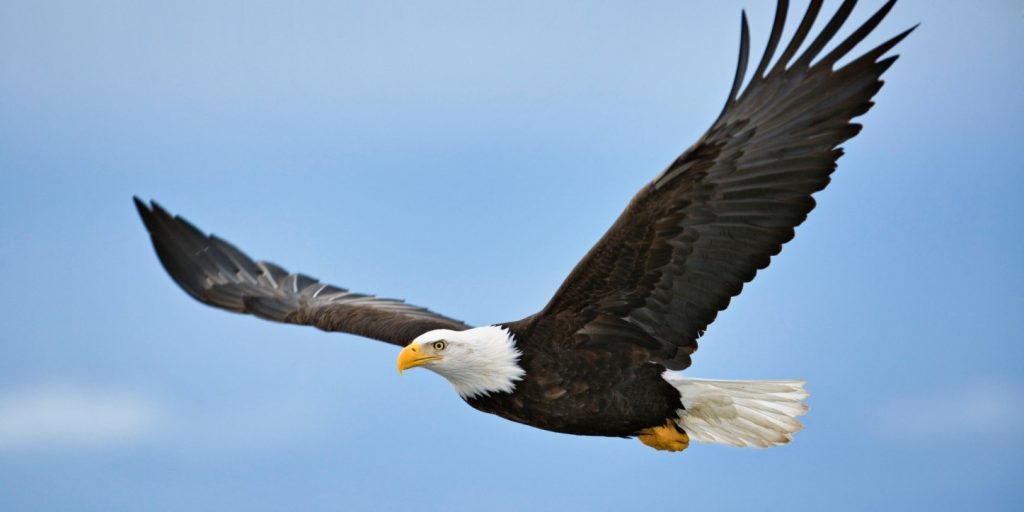 3 Tips – Be Here, Bring your Best Binoculars, and Respect the Eagle!

You’re floating effortlessly on an anti-gravity, 8-foot wingspan at ten thousand feet above Illinois Starved Rock Country.  Gentle winds slip past your aerodynamic form and, in the perfect silence, the sun’s radiant energy is as loud as your favorite song…

For millennia the human race has held an innate fascination with eagles. No less the Bald Eagle that frequents the winter skies of Starved Rock Country near Chicagoland. So we thought that, since Bald Eagle season is hear in Illinois, let’s revisit a few helpful basics when scanning the skies and timber skylines for this magnificent raptor that means so much to us Americans.

Yes, that’s us inviting you to make a trip of it!

Most birders with a passion for Bald Eagles would agree that, apart from Alaska, Starved Rock Country presents the most attractive Bald Eagle-watching opportunity. In the winter months we grab our gear and head out for a few days to get our annual Bald Eagle fix along the Illinois Waterway where these raptors hunt for fish and other prey.

For many, Ottawa (Illinois) would be the preferred destination to do just that. We’ve fallen in love with the friendly community, rich natural beauty, and literally hundreds of Bald Eagles calling our focus to the skies.

Reviews on TripAdvisor for Starved Rock State Park bear witness to this with thousands of positive reviews, certificates of excellence and photographs to convince you of the same! Check out some of the Vacation Rental opportunities at Heritage Harbor Ottawa to take your Starved Rock Country experience to whole new heights!

Tip #2 – Be sure to fly with the eagles in high definition!

Perched on the edge of the Illinois Waterway not far from his Harbor Cottage at Heritage Harbor in Ottawa, Illinois, one Bald Eagle fanatic is mesmerized by yet another siting of this magnificent bird of prey. He is fortunate enough to view the unfolding scene of a mother hunting for her young through the uber-focus of his SNYPEX Knight D-ED 8×50 Binoculars.

“Ahem, yes”, he says with a self-confident rumble in his throat, “I am boasting…but what’s a little brag between birders, right?”

Voted the best birding binoculars of 2017, these bad boys give the user the vivid sense that they are literally sharing the sky with this predatory bird as it slides through the open air. “I see the hunger in her eyes, and the urgency she feels because of the fact that her nest is vulnerable while she is out hunting”, says our fanatic (who will remain nameless).

According to BestBinocularsReviews.com, there are some important pointers to ensuring that you select the correct pair of binoculars for your bird-watching escapades:

Firstly, if you’re after one pair of binoculars that can serve all your bird-watching needs, don’t go more powerful than 8x magnification. Why? Well, BBR gives us 3 good reasons…

So do yourself a favor and get your eyes on a pair of these before you arrive Heritage Harbor Vacation Rentals or any other highly rated accommodation in Starved Rock Country.

Tip #3 – Remember where this mighty raptor has come from, and do your part to conserve it

You may remember that, in 1972, Bald Eagles were regarded as nearing extinction in America. Having become the icon of US-pride from 1782 until that time, the raptor was dwindling in numbers owing to mankind’s culling them to protect the fishing industry, and using pesticides that would ultimately poison these masters of the sky rather than the rodents that they preyed upon.

Since that time, when DDT (toxic pesticide) was banned, the Bald Eagle has made a triumphant comeback – much to the pleasure of every patriotic American.

The US Fish and Wildlife Service continues to manage the Bald Eagle population with great diligence and care. It also urges the public to remember that, while it is no longer endangered, the Bald Eagle is still very much protected under US law. We all share the responsibility of ensuring that they are undisturbed and unharmed when we venture out to capture them photographically or visually in their natural habitats.

We’ll keep an eye out for you! Don’t miss the flight of the Bald Eagle in Starved Rock Country this February!